Welcome to the show notes for the 4th edition of Indie Andaluz first broadcast on Sunday 15 April, 2018 on Radio Mix 106 fm.

The show got off to a flying start with Penelope by Trashtucada taken from the band’s 2008 debut album ‘Y No Es Broma’.
If you liked that then Trashtucada, along with a rake of great bands, will be playing the rescheduled Primavera Trompetera festival at the Jerez motor racing circuit on May the 25th and 26th.
Trashtucada are based in Chiclana, just a couple of kilometres down the road from this next band’s home base in Cadiz. Detergente Liquido are a 5-piece indie pop band formed about five years ago since which time they have built up a good following. I’m going to play you their track El Baile del Apio from their debut EP Las Obras de La Catedral

Detergente Liquido are on the bill for the Meridiano Cero festival, a free event being held on the 28th of April in San Fernando near Cadiz. For more information visit www.radiomix106.com

Talking of venues, Gibraltar’s Rock on the Rock Club is holding a Battle of the Bands this spring, the first heat of which is taking place this coming Saturday the 20th of April. Competing on the night are three bands The Tragic Company, Medictum and Crimson Clover.
I’m going to play a track from each of these bands beginning with the Estepona rock band The Tragic Company and their song Molly taken from the 2010 album ‘Bass, Middle, Treble’.

Great track from a great album, which is available as a free download on Bandcamp!

The second band taking part are Medictum, a heavy -stroke- thrash metal foursome from Seville. They don’t have a lot of recorded material available but I did manage to get hold of a demo for their track Ultima Oportunidad which I’m going to play for you now.

The final contestant is Crimson Clover, an English rock band based in Gibraltar and this is ‘Line of Sight’.

That was Crimson Clover from Gibraltar, who lead us very neatly into the Gibraltar section of the show.

This next track is by the young Gibraltarian singer guitarist Jesse Sampere and is entitled Are You Ready.

Staying with Gibraltar and another great band by the name of Dead City Radio, fronted by James Culatto, and ably supported by Robin Batchelor on guitars former Orange Peel bassist Daniel Ghio and Micheal Gomez on drums. This is ‘You Want It’ from the 2017 EP #2

Dead City Radio are among the select few local bands sharing the stage with the likes of Stormzy, Two Door Cinema Club, and the Boomtown Rats at the MTV Gibraltar Calling festival in September, but if you can’t wait that long they will be playing Louie Louie’s in Estepona next Saturday the 20th of April where they will be supported by the young Sotogrande indie rock foursome Jacver. This is their latest track ‘Well I’m Glad You’re Doing Fine Without Me’.

A few weeks ago I opened my very first show in this series of Indie Andaluz with a track by the Seville based experimental pop band who fuse flamenco and rock with African beats and reggae, along with a bit of everything else to give them a unique sound. This is Ninja del Fuego from their 2010 album ‘Un Gramo de Fe’.

This next track is from a singer songwriter who sent us a track for us to play. This is from Rashpal Singh a young singer songwriter living on the Costa del Sol who goes by the name of Rashklaw. This track is called ‘Keep on Climbing’

This next band are from Malaga and go by the name of The Loud Residents whose origins as a garage punk band has matured into a more alt-rock vibe. This is Sex, Sex, Sex from their 2015 album For You Lovers and Sinners.

Another Malaga band are the curiously named Hairy Nipples who describe their sound as Mambo-Punk. If you want to know what Mambo-Punk sounds like then pin back your lugholes ad listen to the Hairy Nipples’ Tell Your Momma from the 2015 EP ‘Brothel Safety’.

As you know we like to keep you up to date on upcoming gigs and festivals, and here’s some news just in regarding The Mijas Puppet Fight Festival which is a national battle of the bands being held at the sala Ana Marquez venue on the Camino de Coin 85, Mijas Costa.
Organised by South Tracks RecordZ, the semi finals will take place on May the 5th and May the 12th with the final on June the 9.
The organisers have whittled down the over 50 entries to a final six, three of which will play on each of the semi finals. On Saturday the 5th of May the bands Pülse from Valencia, M. Ferler from Barcelona and Paradise Key from Badjoz will battle it out, whilst on Saturday the 12th of May it is the turn of the southern contingent with Yeti Black from Granada, Blusa from Seville, and Invortice from Murcia entering the fray.
Tickets are just 5 euros per day or 10 euros for a three day pass and are available at www.ticketea.com
To give you a taste of this event here’s a track from the Valencia band Pülse

We opened the second half of the show with the track Gladiadores Emplumados taken from the 2014 album La Lengua Chivata by Marcos del Ojo Barroso, who is better known as “el Canijo de Jerez” the former frontman with the flamenco rock band Los Delinquentes. Since leaving the band in 2012 he has carved out a successful solo career for himself and is another of the acts at next month’s Primavera Trompetera.

As I mentioned earlier apart from the great music featured in the show we also like to bring you news of upcoming events, and as the summer approaches the finishing touches are being made to some of the regular festivals. In the last couple of days the date for this year’s 11th Fuengirola Pop weekend has been released with the event being held from the 19th to the 21st of July. As yet there are no acts confirmed but we will keep you updated as soon as we know more. Also released are the dates for the 6th Ruta del Rock in Torremolinos which will be held over the weekends of the 11th to the 13th and the 18th to the 20th of May, again no confirmations as yet but we will keep you posted.

So back to the music and something a little different. Fundacion Raperos Atipicos de Cadiz FRAC for short combine hip hop and rap with the cutting edge comedy satire of their hometown’s traditional carnival singing groups. This Mudancehall from the 2010 album of Expropiese

Next up we have the rap duo Manuel González Rodríguez and his brother Ignacio otherwise known as Toteking and Shotta, either individually or as a duo the pair are a big fixture on the Spanish rap and hip hop scene and are another act at Primavera Trompetera.

Arco is the former frontman of the popular band El Puchero del Hortelano which split in 2015.
Arco is one of the new generation of urban musicians half way between the pop and folk, whose first album ‘Uno’ reached Number 8 in the Spanish charts shortly after release in 2016 and which has been recognised as one of the best albums of that year by the Spanish music press.
Arco is currently and recording his second album planned for release this year.
This track is Un Dia Perfecto taken from the debut album ‘Uno’.

Great news for fans of Arco as he is a busy boy next month playing both the Interstellar Festival in Seville and the Bull Festival in Granada both on the weekend of the 18th and 19th of May.

I’ve been presenting these shows on and off for a few years now before finding a permanent home and a larger audience here on Mix 106 and it’s always sad when a band you’ve enjoyed in the past disappears off of the radar. But bands split up and move on, with their members becoming part of a new outfit, or joining the foreign legion or whatever happens and this seems to be the case with the next band from Malaga La Sociedad De Los Tercos. I can find no recent news on any of their social media platforms or website so I can only presume they are no longer with us, but nevermind the music lives on and this is Un Tanto Extraño by La Sociedad De Los Tercos.

Another act performing at next month’s Interstelar Festival in Sevilla is Juanito Makande, a jazz, funk, flamenco fusion singer songwriter from La Linea de la Concepcion just across the border from Gibraltar. This track is Niña Voladora from the 2014 album ‘Las canciones que escribí mientras volaba’

Electrohumedos is an instrumental surf trio from Sevilla, and are part of quite a large surf music scene in the South of Spain. This track is Polca Miseria from their 2014 self-titled debut album.

This next band El Imperio del Perro is an indie rock band from Seville, whose musical style pays homage to the Britpop bands of the 90s. As you may have gathered by now there is a considerable music scene in Seville, and tonight’s selection of music has quite unintentionally lingered in that corner of Andalucia, but there are plenty of other places with just as big a scene, such as Granada and Malaga among others, so we’ll try and redress the balance in the next couple of shows. That aside, this Buitres from the the band’s self titled 2016 debut album.

Once again if you enjoyed that, El Imperio del Perro are also playing at both the Meridianocero festival in San Fernando at the end of this month and next month’s Interstelar in Seville.

Okay, I’m not even going to apologise for this next band who, yep you guessed it, is from Seville and is playing Meridanocero this month. Sr Chinarro is an indie pop rock band formed back in 1990 and has an extensive discography of some 18 LPs, the latest Asuncion released earlier this year. This track is Mas Grande Que Barcelona and is from their 2013 album ‘Enhorabuena a los Cuatro’.

A week or two ago I played a track from the Sabinillas hip hop trio KNK. All three elements of the group also pursue solo projects and this next track is by one of the group Kamikaze Yusivo and is titled ‘A Mis Anchas’.

And now, the end is near so before I go don’t forget to like us up on our Facebook page @mix106fm and join us on our Facebook group Radio Mix 106 FM and let us know about yourselves, your music and any upcoming gigs.

I’m going to close the show with a track from Hora Zulu an alternative rap metal band from Granada founded back in 2000 by former Lagartija Nick guitarist Paco Luque. Despite a few lineup changes the band is still enjoying great popularity and this track Gabinas de Cochero is off of the 2012 album Siempre Soñe Saber Sobre Nadie Nego Nunca Nada.

So all that remains is for me to bid you farewell until next week and to remind you can listen to this and previous editions of the show along with Liz Alexandria’s World Music showcase ‘Going Places’ and Sid Olivera’s celebrity interviews on ‘Two’s Company’ on Mix Reloaded at www.radiomix106.com and leave in the tender hands of Hora Zulu… 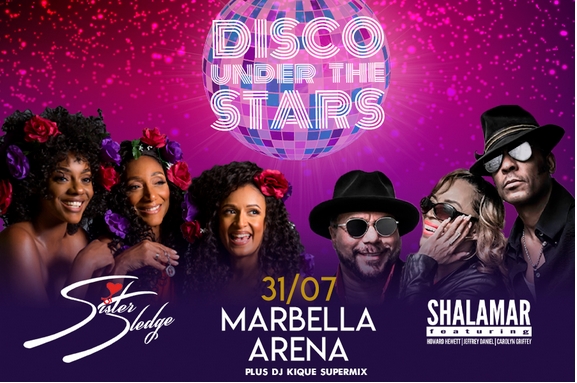 UB40 in concert in Estepona this summer 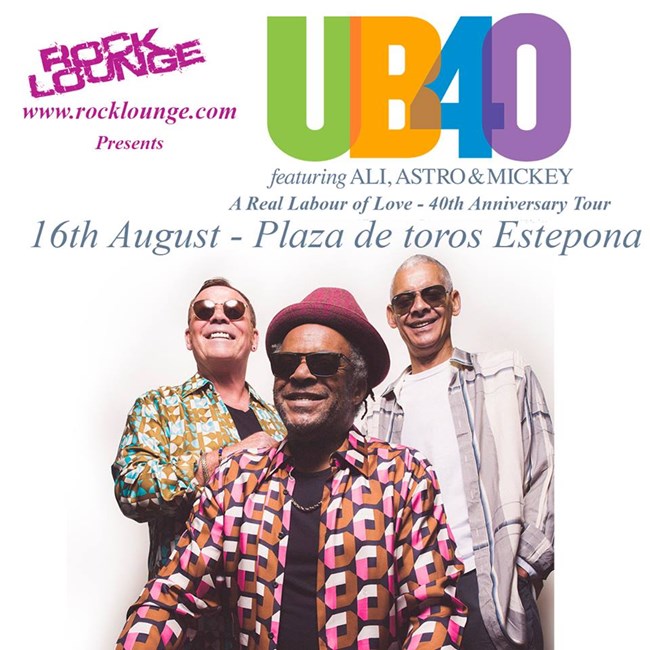 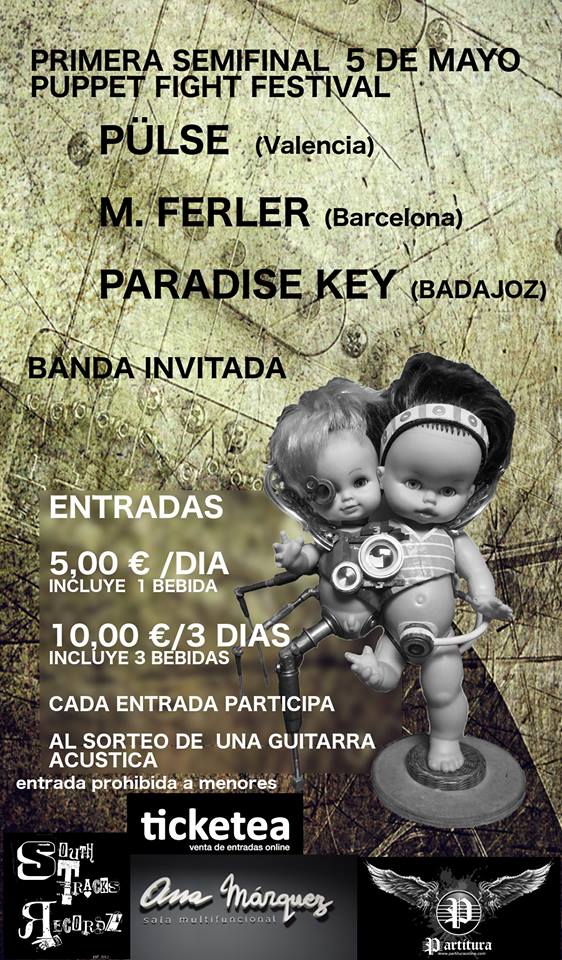